What Should You Know about Garbage Disposal Care? 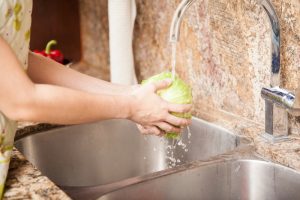 One of the great luxuries that modern plumbing has brought into many homes is that of the garbage disposal. And if you have one in your kitchen, you likely can’t even imagine cooking and cleaning up without it. Unfinished meals, kitchen scraps, or even spoiling leftovers are easily and hygienically disposed of, rather than sitting in your trash can and smelling up the place. But, could this dependence on your garbage disposal system get in you trouble?

If you’ve ever found yourself frustrated by your garbage disposal getting jammed up, more than once, or you’ve had to call a professional Dupont plumber to fix the mechanism, then chances are you aren’t giving this appliance the proper care it needs. This isn’t your fault, though, if you don’t know what items and do not belong in your garbage disposal system to begin with! Keep reading to learn more.

Toss Non-Food Items in the Trash Can

Many people do assume this—that sharp blade rotate around to chop up food and trash before sending it down the drain, but this isn’t actually the case. Instead, your garbage disposal utilizes a motor, which powers an impeller. At the end of that impeller, the “blades” are not actually sharp at all.

What’s grinding the food waste is a component called the grind ring, which relies on centrifugal force rather than sharp blades. For this reason, items like plastic, paper, and other types of wrappers and garbage items don’t belong in the garbage disposal system. Some can slip through the cracks and move into the drains, but still pose a risk to your sewer line.

Hard food items include byproducts such as meat bones and fruit pits. Since the garbage disposal grinds down food before sending it down the drain, it won’t be very effective on these types of materials. Not only can you actually damage the disposal system this way, but these items can get lodged in your drain and cause serious blockages.

Be sure to think about how the texture of food might interact with the garbage disposal, and whether or not it might create problems for the mechanism. Take stringy, fibrous foods like asparagus and celery, for instance. These are actually pretty common problems for garbage disposals.

They can potentially wrap around the motor and cause it to jam up. Additionally, onion skins, corn husks, and any other “papery” material can have the same effect. These items should be thrown away instead of thrown down the drain.