The Time to Prevent Frozen Pipes is Now 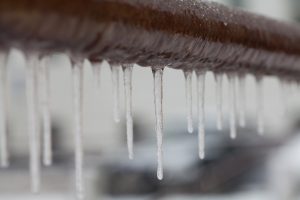 When compared to parts of the east coast and the Midwest, our winters aren’t that cold, right? We don’t really need to worry about much as far as weather-related incidents. One wintertime problem you should be aware of though, is the threat of frozen pipes. And no, it’s not too early to begin thinking about this and preparing for potential plumbing issues.

Historically, our temperatures rarely dip below freezing, but it does happen. This is a reason to be even more diligent about this issue, because even though we don’t think about it as much as homeowners in colder climates, just a few days of temperatures at 30° or below this winter can result in frozen—and subsequently burst—pipes in your home. So, what can you do to prevent this?

As soon as temperatures drop low enough that you won’t be using your outdoor plumbing—sprinkler system, hoses, etc.—go ahead and open your outdoor faucets, as they are the most prone to freezing. Also, turn off the water flow to these faucets, whether you use them for sprinklers or any other outdoor application.

Let all the water drain from them, and leave them open. You may even want to place insulated caps on your faucet openings and hose openings as extra protection. And speaking of your hoses, be sure you disconnect them, too. Let them drain, and store them indoors, or at least in a garage or storage shed where they won’t be too exposed to colder temperatures.

There are a number of pipes in your plumbing system that run throughout your home and can be vulnerable to freezing temperatures. Some of them though, you still need to use no matter what time of the year it is. That means they’re attached to faucets that you can’t just drain and turn off the water supply to—such as under-sink pipes, basement plumbing, or pipes running through your crawlspace.

In order to properly protect this section of plumbing during the chillier months, it’s wise to invest in some pipe insulating sleeves, which you can find at your local hardware store. This helps keep the temperature of the water in your pipes from dropping too low. If you’d rather go another route, you can use towels instead.

Typically, you’re not going to have exposed plumbing in your bathrooms or kitchen area. This means it’s going to be under your sinks, or behind walls—walls that lead outdoors. This makes these pipes sensitive to freezing. But leaving your cabinets open lets the warmth from your heating system reach them, making them much less likely to freeze.

You might be wondering, especially since this isn’t exactly a common problem in the Olympia area, why you need to be concerned with this anyway. Can’t you just run some hot water and thaw the pipes on your own?

The problem with this line of thinking is that what you don’t realize is the thawing process causes a pressure change in your pipes. That pressure change can lead to cracked and even burst pipes. Not only will this result in significant water and plumbing damage, but it can injure you, as well.

To repair frozen pipes, the best thing you can do is to call in an experienced plumbing professional, so we can get your plumbing system back in top shape.